The famous OsakaMunicipal Museum of Fine Art that displays more than 8000 works is a must visit for the art buffs. The excellent collection includes classical Japanese arts of 12th-14th century, contemporary Japanese art, various Chinese works of art and many statues of Buddha.

The picturesque Tempozan Harbor Village is another favorite place to visit. It has tons of entertainments like the giant Ferris wheel, the Suntory Museum featuring the largest IMAX theatre in the world as well as many shops, theaters and restaurants.

The wonderful Shitennoji Temple is the oldest temple and a major religious and cultural site in Japan. The temple erected in 593 has a fantastic five-story pagoda, golden lobby and a turtle sanctuary with serene gardens.

The magnificent Umeda Sky Building with a roof garden observatory is the most famous skyscraper in Osaka. The ultramodern building over170 meters in height offers a stunning view of the city from its observation deck on the 39th floor. Also, enjoy some great sushi in the fine underground food court. The World Trade Center Cosmo Tower in the Osaka Bay area and Tsutenkaku tower in Shin- Sekai neighborhood are the other famous skyscrapers.

Tour the Sumiyoshi Taisha Shrine which is renowned for its architectural beauty and design. This national treasure is one of the oldest shrines in the country. Keitakuen Garden with 19,800 sq m area, featuring alluring azaleas and chrysanthemums is city’s favorite park to relax. Founded in Meiji era, by a master gardener, Keitakuen Garden is a classic example for Japanese mode of gardening. The very huge Nagai Park and the Kema Sakuranomiya Park along the Okawa River are the other two popular recreational areas.

Osaka is known for fabulous shopping and the city has many well-known areas for shopping. Tennoji is ideal for cheap clothing and accessories while Namba, Ame-mura and Shinsaibashi have many up-market malls, stores and souvenir shops. Umeda, Tenjinbashi-suji and Den Den Town are some other popular shopping centers.

Watch the famous sumo wrestling at Osaka Prefectural Gymnasium in Namba. Osaka is famed for its food and don’t miss some of the local cuisine like okonomiyaki, takoyaki, udon and various sushi. Most of the streets have plenty of good restaurants. 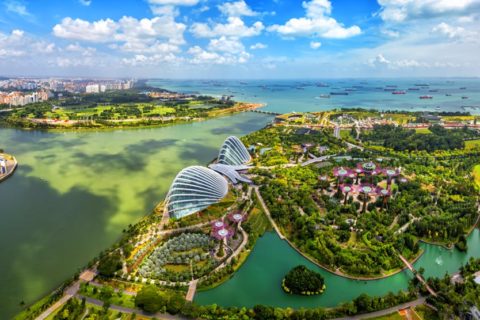